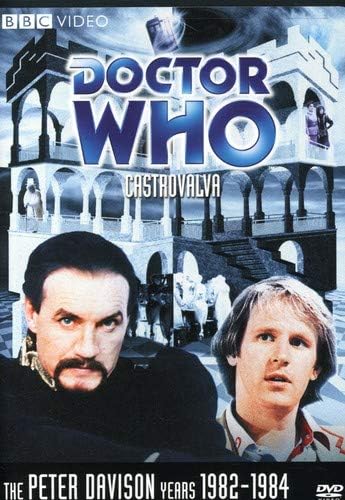 The four-episode serial Castrovalva not only kicked off the 19th season of Doctor Who, but introduced the fifth incarnation of the venerable British sci-fi hero in the younger (and blonder) form of Peter Davidson, who replaced fan favorite Tom Baker at the end of the previous season. Castrovalva picks up where the Baker finale, Logopolis (also available on DVD), left off, with the Doctor in a weakened state after his transformation, and in need of rest and recuperation. His companions set a course for the planet of Castrovalva, but all is not as it seems on the peaceful and educated world: Could the Doctor's old nemesis The Master be setting a trap for the ailing Time Lord? It's a strong debut for Davidson, who quickly sets his own path as the Doctor (while referencing his predecessor's traits and quirks in several clever bits), and the single disc DVD's extras do an excellent job of covering the transitional phase that the cast and crew underwent during the serial's production. Davidson is front and center on the commentary tracks for all four episodes, and he's joined by castmate Janet Fielding (Tegan), director Fiona Cumming, and writer Christopher H. Bidmead. And he's the focus of two featurettes: "Being Doctor Who," which covers his tenure as the Doctor, and "The Crowded TARDIS," in which he joins Baker, Fielding, and Sarah Sutton (Nyssa) to discuss the Doctor's multiple companions in the Davidson years. Cumming is also profiled in a short feature on directing the episode, and the BBC vaults yield interviews with Davidson from the period on the children's shows Blue Peter and Swap Shop. A pair of deleted scenes, continuity announcements, a photo gallery, the usual above-par text commentary, a PDF of printed material on the show, and a music video for a remix of Peter Howell's theme music round out the supplements. "i" -- Paul Gaita

After plummeting from the Pharos Project telescope, the Doctor regenerates. The time travelers escape the Master's clutches, but the Doctor's regeneration is failing, and Adric goes missing in the depths of the TARDIS. Only Nyssa and Tegan can save the day by steering the TARDIS to the city of Castrovalva, renowned for its healing powers. But evil lurks at the heart of this simple paradise. (Episodes 1-4, 96 mins)