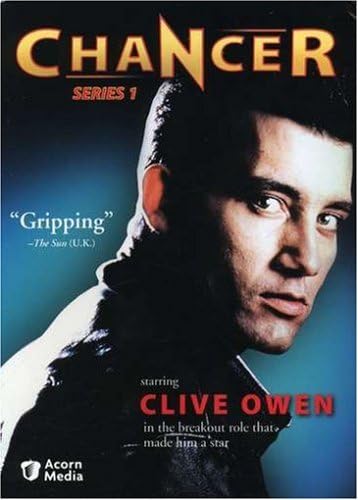 Clive Owen burst onto the British culture scene in the neo-noir series Chancer as Stephen Crane, a broody, raffish con man with--wait for it--a heart of gold (that sometimes takes some hunting to find). In the first season of the series, which debuted in 1990, Crane is as fiercely devoted to his friends as he is to using his past skills as a swindler, taking down those more unprincipled than he. The rough-hewn Owen inhabits the role with the ease of a young Robert Mitchum, tossing off bons mots out of the side of his mouth, including a rolling succession of "Crane's Law Rule Number One", such as "Never say die. Unless of course you're already dead--but people are too polite to point it out."

The plots are wildly complex, involving land-use scams, a failing sports-car company, ruthless executives and plucky pals allied against formidable odds. And Crane's personal life is as dodgy--and riveting--as his business deals, with affections being pulled between longtime acquaintance Jo (the splendid British actress Susannah Harker) and his workplace sidekick Victoria (Lynsey Baxter). Through it all, Owen and Crane remain just opaque enough to be a riveting anti-hero--and something delicious for non-British TV fans to discover. The boxed set includes all 13 episodes as well as a rich still-photo gallery and cast filmographies. "i"--A.T. Hurley

In the role that led to film stardom in "i"Croupier and an Oscaramp;reg nomination in "i"Closer, Clive Owen is simply dazzling as Stephen Crane -- con artist, swindler, and purported savior of a struggling sports car company.

Sacked from an investment bank after one dodgy deal too many, Stephen lands a job at Douglas Motors, a business distinguished by old-fashioned craftsmanship and plagued by decades of familial mismanagement. There he finds himself playing surrogate son to the family patriarch, confidant to the adulterous son-in-law, and lover to the beautiful but willful daughter. All the while, he fends off forays from his erstwhile boss (Leslie Phillips), a deliciously evil banker bent on recovering a bundle of swindled money. But, can Stephen keep his double-dealing past at bay?