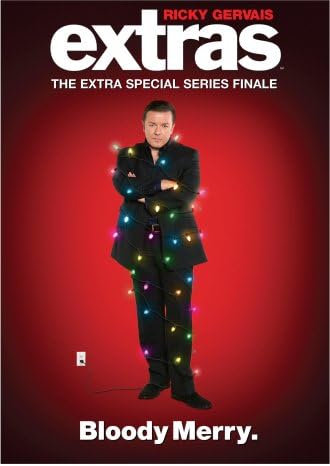 Uneasy lies the head that wears the crown of celebrity. Andy Millman (Ricky Gervais) is back and more miserable than ever in this darker and devastatingly funny finale to the Emmy-winning series. Though his sitcom When the Whistle Blows rates six million viewers, he is, as ever, mindful of the critics' barbs and jealous of colleagues landing the prestige film roles he covets. "I'm not proud of having Britain's No. 1 catchphrase," he grouses (actually, he has sunk to No. 3, now trailing "You are the weakest link, goodbye"). Worse, he has become a right bastard, arrogantly treating crewmembers and his one true friend, Maggie (a heartbreaking Ashley Jensen), like dirt. Andy finally drops his clueless and incompetent agent (series co-creator Stephen Merchant) and quits the show. "Don't worry about me," he proclaims. "The phone won't stop ringing."

Unlike the finale of the original British incarnation of The Office, this super-duper-sized episode really has no loose ends to tie up. In Andy's humiliating comeuppance (he sinks to portraying an alien on "i"Dr. Who and joins the desperate housemates on "i"Celebrity Big Brother), Emmy and Golden Globe Award-winner Gervais has the perfect vessel with which to rail against soul-sucking celebrity, degrading tabloid culture, and "the gutter press." As for Andy and Maggie, those longing for some kind of Tim/Dawn or Jim/Pam hookup may not get exactly what they want, but they will get what they need in the lovely final scenes. A-listers having a laugh at their own images have always been one of "i"Extras' special treats. The finale features jaw-dropping cameos by Clive Owen and George Michael, performing community service yet again. Kudos to HBO for making this available separately for those who have already purchased series one and two. For those unfamiliar with Extras, this feature-length finale can pretty much stand on its own. But, really, just go ahead and buy The Complete Series. You're going to want to see what you've missed. --Donald Liebenson

HBO presents the finale of its Emmyｮ Award-winning comedy series written and directed by British phenomenon Ricky Gervais, founder of BBCs original The Office. Gervais reprises his Emmyｮ-winning role as Andy Millman, the one time extra and current sitcom star whose breakthrough show, When the Whistle Blows, remains a popular (if critically panned) part of British TV culture. Chafing from three seasons worth of recycled plotlines and catchphrases, Andy wants more than ever to break out of his TV stereotype, and is willing to do anything including maybe even pulling the plug on his hit show to do it. But does Andy have the talent and savvy it takes to get his wish: to be both respected and famous?