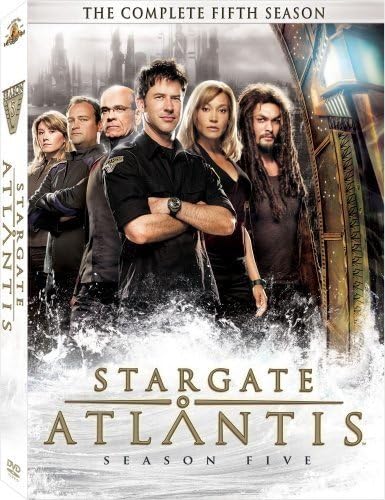 As the curtain is drawn on the first of the 20 episodes that comprise this fifth (and apparently last) season of Stargate Atlantis, we’re assured that “the threat level is down” across the universe. The “sentient machines” known as the Replicators have been defeated; The Wraith, the white-haired, translucent-skinned, cat-eyed vampire dudes who have been our heroes’ principal nemeses all along, are in disarray; And while the character known as Michael, who was the subject of the team's ongoing ""retro-virus"" experiment (designed to make Wraiths human) in Season Two and played a significant recurring role in Season Three, is still around, he too no longer inspires much dread. So, “the threat level is down,” right? Yeah, right. You don’t need to be an astrophysicist to know that rosy analysis is mere wishful thinking. Indeed, Michael’s human-Wraith “hybrids” are a serious menace almost immediately; and by the end of the season, not only have the Wraith pulled themselves together, they have constructed the mother of all “hive ships,” located Planet Earth, and begun attacking it. In between, regular "i"Atlantis fans will witness a few significant developments: among other things, Samantha Carter ("i"Stargate SG-1 veteran Amanda Tapping), who took over command of Atlantis in Season Four, is soon replaced by the by-the-book civilian Richard Woolsey (Robert Picardo); team member Teyla (Rachel Luttrell) has a baby; and Rodney McKay (David Hewlett), the kvetching genius scientist, and medical doc Jennifer Keller (Jewel Staite) kindle a romantic relationship. Daniel Jackson (Michael Shanks), another "i"SG-1 veteran, appears in two mid-season episodes.

Story-wise, Season Five offers considerable variety; “The Daedalus Variations” is heady sci-fi filled with technical mumbo-jumbo about parallel universes, while “Whispers” is a zombie jamboree straight out of "i"Night of the Living Dead, and "i"Vegas, an “alternate reality episode” in which Lt. Col. John Sheppard (Joe Flanigan, in what is still the show’s most appealing role) plays a beleaguered homicide detective, takes place almost entirely in that city. As usual, the best stories are the ones involving the Wraith, including “The Queen,” in which Teyla temporarily transforms into one of those villainous creatures. Also as usual, the visual effects are first-rate, and the bonus material is copious (including commentaries for every episode and all manner of featurettes) and impressive. If this is indeed the end of "i"Stargate Atlantis as a series (a feature-length movie is already in production), it will certainly be missed--but at least they’re quitting while they’re ahead. "i"--Sam Graham

In this action-packed fifth season sparks fly when Woolsey becomes the new leader of the Atlantis team. Meanwhile, McKay faces difficult personal challenges; Teyla must balance her roles as mother and warrior; Ronan’s past returns with a vengeance, and Keller finds peril, then help, from an unlikely source. A provisional relationship with the Wraith takes a shocking turn and new adversaries test the team’s courage and resolve like never before.